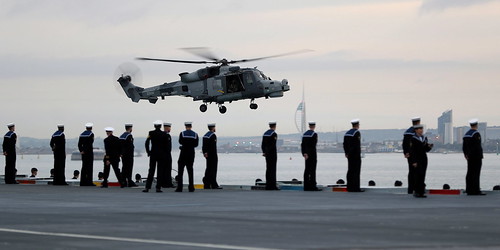 Image by QEClassCarriers
Britain’s future flagship HMS Queen Elizabeth sailed into her home port of Portsmouth for the first time on Wednesday 16 August. Greeted by thousands of people lining the Portsmouth seafront, the 65,000-tonne carrier was met with the warmest of welcomes as she arrived in her home port just after 7am.

Royal Navy sailors lined up in ceremonial procedure on the flight deck of the mammoth ship, standing alongside civilian colleagues from the Aircraft Carrier Alliance, as she passed the Round Tower. The ship will berth at the newly-opened Princess Royal Jetty at Her Majesty’s Naval Base Portsmouth, which will be home to both of the Royal Navy’s new aircraft carriers.

Have you tried: Diving with Sharks?